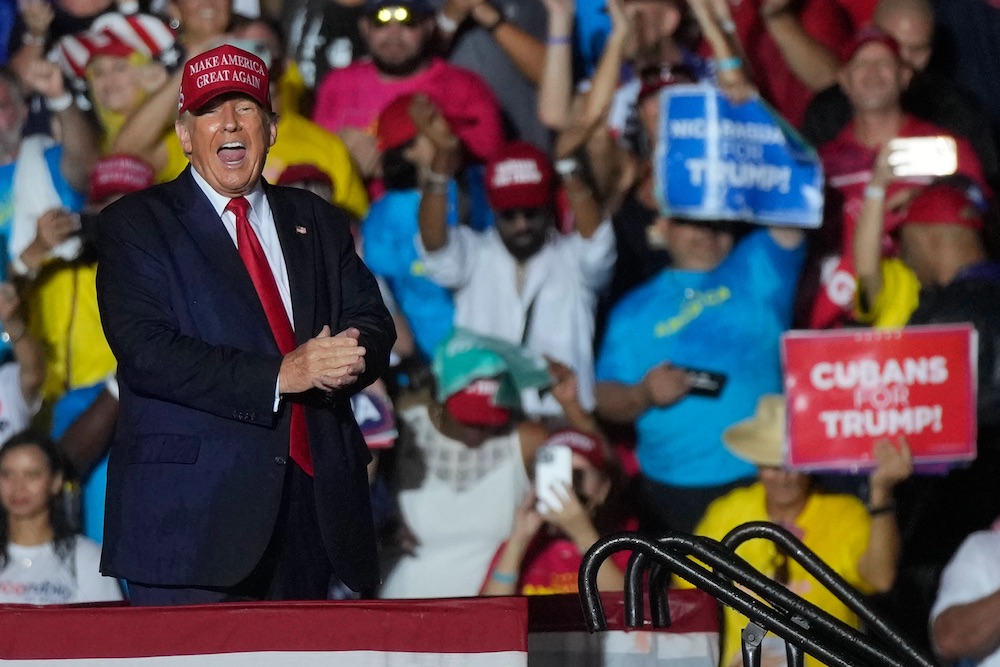 Speechless President Donald J. Trump stood at the podium and watched a compilation of video footage put together showing a few of the many horrifying and blistering slip-ups by Democrat Joe Biden over the past two years while he has been in office.

Trump’s Save America tour has been in high gear right before the 2022 mid-terms, on Tuesday, to rally support for several America First candidates.

At a recent rally, where Trump stood before a massive enthusiastic audience who cheered ‘Let’s go, Brandon, and “we want Trump,” the video of Biden played on a big jumbotron screen, and the audience reacted with embarrassed laughter, frustration, and anger, at the sight of a frail elderly man losing his train of thought, wandering, and stammering.

It is especially stinging for the crowds to see Biden in Trump’s place, giving various speeches and totally unable to communicate his thoughts. The crowds remember the massive amount of suspicious questions they have about how Biden could have possibly beaten Trump, so enthusiasm to mock Biden is high.

US Rep. Marjorie Taylor Green reacted to one of Trump’s most recent rallies and posted on her social media:

I wish Pres Trump announced last night in Ohio, but he chose to put everyone else first.

He’s put everyone else first all along.

I wish Pres Trump announced last night in Ohio, but he chose to put everyone else first.

He’s put everyone else first all along.

POLITICO reported on the election even activity: “Joe Biden stayed away from the most challenging races on Election Day eve, opting to campaign in safe Democratic territory before what’s expected to be a difficult night for his party,” the outlet reported, adding:

The lapdog outlet wasn’t interested in Trump’s rally stops to galvanize Republican votes, nor were they interested in what Trump showed that got the interest of his supporters.

The footage from Trump’s rallies are always enthusiastic:

7 years later, Trump rallies are only getting bigger. & he doesn’t need the country music artist of the year as part of the show..

The people are with Trump no matter what Twitter pundits, Paul Ryan, & mega RINO donors like Ken Griffin want you to believe. pic.twitter.com/owfFCv6DjE

No matter how many times people see the footage of Biden brutalizing the English language, stumbling, and stammering, there is a bit of awkward shock and embarrassment that Biden is the leader of the free world and he is lacking processing abilities, between what he is thinking and what he wants to say.

One podcaster caught the humiliating video of Biden and his blunders: