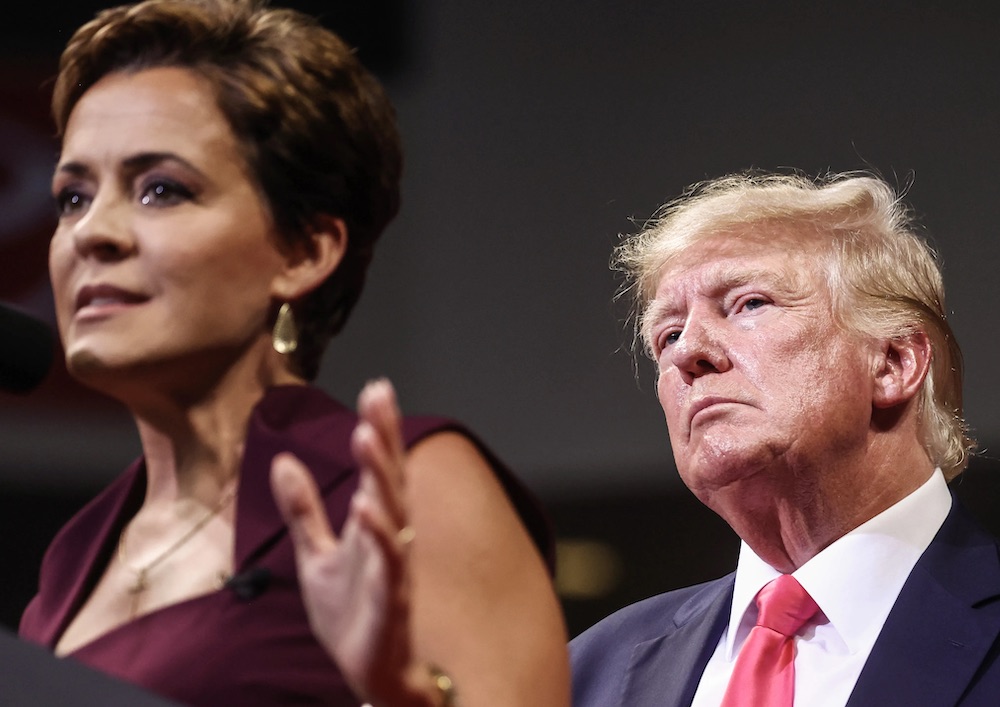 President Donald J. Trump highlighted the very bizarre election that handed victory to Democrat Katie Hobbs as the next Governor of Arizona.

‘They just took the election away from Kari Lake’: Trump wades in after his candidate LOSES to Democrat Katie Hobbs who flipped the state blue in the race to be the next governor of Arizona hours before his expected 2024 announcement.

Trump posted his feelings about the election results on his Truth social account.

“His candidate Kari Lake suffered a shocking defeat to Democrat Katie Hobbs, and Lake has also made unproven claims of voter fraud in the gubernatorial election,” according to the pro-leftist media coverage.

“Donald Trump says Kari Lake had the race for Arizona governor race stolen from her after her defeat to Democratic rival Katie Hobbs and just hours before he is set to announce his third fun for president,” Jack Newman reported for the Daily Mail, adding:

“Lake, a vocal MAGA supporter who backed Trump’s claims of 2020 voter fraud, suffered a shock defeat to Democrat Katie Hobbs, which she also claimed was fixed. Soon after the race was called, rather than conceding gracefully, Lake took to Twitter to say: ‘Arizonans know BS when they see it.’ Trump added fuel to the flames on Truth Social, where he posted: ‘Wow! They just took the election away from Kari Lake. It’s really bad out there!”

Arizonans know BS when they see it. The joy about the news, for Newman, over the sight of more unethical elections was quite noteworthy:

“The upset could not come at a worse time for Trump, still reeling from a series of devastating losses from his candidates in the midterms, as he prepares to make a ‘big announcement’ today at Mar-a-Lago.

Many in the Republican party says his push to have election deniers on the ballot squandered their hopes of a red wave, but he has claimed most of the candidates he backed won and those who lost didn’t push election fraud hard enough.”

Of Newman is ignoring the major concerns that people have over obvious problems in Arizona with machines intentionally running on low toner, unable to count and ballots be co-mingled at the voting sites, without any concern for the voters at all.

What the left and RINO right was concerned about was what Trump’s announcement would be on Tuesday:

“The former president has now been urged by senior Republicans not to run again in 2024, but he is still expected to mount a dogged campaign. Over the weekend, he was at his Palm Beach club with his family watching his youngest daughter Tiffany get married to her billionaire partner Michael Boulos,” Newman reported.

“During the celebrations, he tried to convince Ivanka and Jared Kushner to join him on stage for the announcement on Tuesday night, while Eric and Don Jr. are all already behind him, The New York Post reported,” Newman reported in a Maoist style shaming tactic.

Advisers told The Washington Post his bid will have a smaller staff and budget than his 2020 campaign and will be based in South Florida.

“It is part of his strategy to cast Trump again as the underdog, and his team will include top advisors Chris LaCivita and Susie Wiles. Teasing the announcement, Trump said this morning: ‘Hopefully TODAY will turn out to be one of the most important days in the history of our Country!’

Of course, people who do not want to return the Republic to the people are not happy about the potential of Trump running again as a Populist leader- and talking about liberating Americans from the shackles of an oppressive government.

South Dakota Sen. Mike Rounds told CNN: ‘I want someone who is going to unite our party. That’s how we win elections. A reasonable person who would unite the party.’

Idaho Rep. Mike Simpson said: ‘Let’s see who runs. Personally, I don’t think it’s good for the party. I think his policies were good. I just don’t need all the drama with it.’

And an anonymous Republican lawmaker added: ‘It’s like we’re on season 7, 8 of The Apprentice. People are sick of it, they want to turn the channel. Let’s find something else.’

His decision could spark further claims of voter fraud, with the Arizona race now in dispute despite no widespread evidence of illegality.

Hobbs won 50.4% of the votes cast in what was a razor-thin race out of roughly 2.5 million votes counted almost one week on from Election Day

But they also led to warnings that she was stoking trouble in a country still reeling from the January 2021 assault on the Capitol by Trump supporters.

The closely fought governor’s race between Lake and Hobbs was one of the most significant in the general election because Arizona is a battleground state and is expected to play a pivotal role in the 2024 US presidential election.

Even though Lake had been posting increasingly larger margins in vote updates from Maricopa County, she was not gaining a big enough share to overtake Hobbs and was running out of remaining votes.

Vote counting had gone on for days since the Tuesday election, as officials continued to tally massive amounts of late-arriving ballots.

Lake had vowed to ban the state’s mail-in voting, which conspiracy theorists falsely claim is vulnerable to fraud, fueling distrust among voters about the safety of a voting method used by hundreds of thousands of Americans.

Her defeat capped a triumphant week for Democrats, who defied Republicans’ hopes for a ‘red wave’ in the midterm elections.’

Republican colleague Liz Cheney was quick to take to Twitter to mock Lake.

‘Thank you again for the huge boost to our campaign! Enjoy your forced retirement from politics,’ Ms Lake had said.

RINOS like loser Cheney are now out of the closet as the pro-centralized government- Marxist- left.