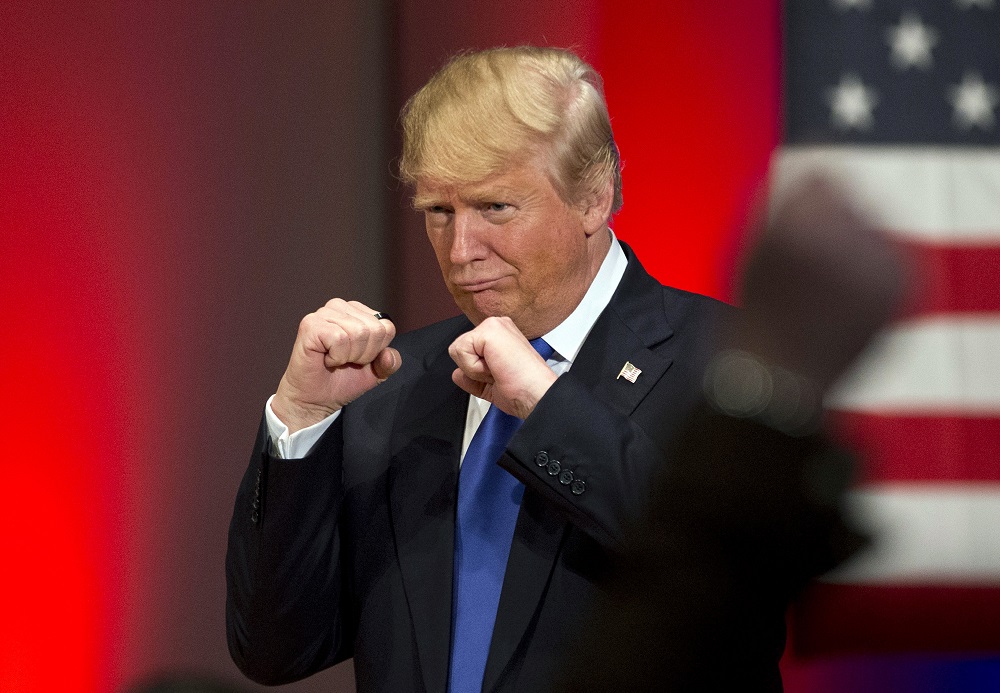 The American people have suffered long enough, and the good news is on the horizon, according to one independent journalist who has discovered a treasure trove of old footage- which will bring uplifting inspiration to those Americans who continue to believe in the potential of a truly liberated and free United States of America.

Our friends at We Love Trump had some spine-tingling good things to report:

This one is going to be controversial.

I know some of you aren’t going to like it.

Some of you are going to say “the Bible says to turn the other cheek”.

And you’d be right.

But this is where I remind you we didn’t elect President Trump to be our national Pastor, we elected a businessman and a fighter.

Someone who knows how to level the playing field…

How to fight back.

From StormHasArrived was the first to post the following:

Every deep state player who was involved in the ‘Hunt for Trump’ over the past 6+ years is about to have the tables turned on them. Big time.

All the sham investigations that they conducted, in an effort to turn the people against Trump, have failed.

President Trump is a man of strong convictions. You didn’t think he was going to let them get away with it, did you?

Nothing can stop what is coming.

Donald Trump has been telling them for decades what he would do, and it’s all right here.

Then Noah picked it up and repeated the messaging- for effect, read it again:

Every deep-state player who was involved in the ‘Hunt for Trump’ over the past 6+ years is about to have the tables turned on them. BIG TIME.

All the sham investigations conducted in an effort to turn the people against Trump, have failed.

Every deep state player who was involved in the ‘Hunt for Trump’ over the past 6+ years is about to have the tables turned on them. BIG TIME.

All the sham investigations conducted in an effort to turn the people against Trump, have failed.

Donald Trump values loyalty above almost all else.

And it’s funny because when you’re rich and powerful, you don’t know who’s truly loyal and who’s just hanging on for the ride to glom off your success.

It’s why he famously also once said this:

President Trump Reveals The Number One Thing He Values

Credit to the “Not Me, Him” channel for finding this old video of a very young Donald Trump.

And to steal an old Mitch Hedberg joke: “every video of me is when I was younger”.

But let’s get serious because this is a very serious clip and it’s amazing how accurately it predicts what’s happening today.

You may have heard the quote before but here is the video of him saying it.

Basically, this is a young Donald Trump being asked about his friends and how he knows if they are true friends or not.

Good question when you’re worth billions.

How many people TRULY have your back?

Donald answers the question by saying because he himself is extremely loyal to people, he takes it as a grave offense when people are not loyal to him.

And then to directly answer the question he says he’d really love to “lose it all” one day — temporarily — just to see who was truly loyal to him.

Could anything more accurately describe the current state of affairs?

Mr. President, let me be the first to say we’ve had your back since 2015 and we haven’t budged one inch!

You’ve got our FULL SUPPORT and LOYALTY here at WeLoveTrump!

Please enjoy this incredible, prophetic clip where perhaps he didn’t even know it but he was prophesying the future.

Don’t ever doubt how much this man is being used by God.

Cyrus II of Persia, commonly known as Cyrus the Great, was the founder of the Achaemenid Empire, the first Persian empire. Under his rule, the empire embraced all of the previous civilized states of the ancient Near East, expanded vastly and eventually conquered most of Western Asia and much of Central Asia.

He is venerated in the Hebrew Bible as Cyrus the Messiah for conquering Babylon and liberating the Jews from captivity.

Cyrus went down in history as one of the most benevolent conquerors of all time, allowing his subjects to live—and worship—as they pleased.

National Geographic reported on the leadership style of Cyrus:

He was born of royalty. On the death of his father, Cambyses I, Cyrus ruled the Achaemenid dynasty and expanded his ancestral realm into a mighty empire. He triumphed not just through conquest, but also by showing singular tolerance and mercy to those he defeated.

A brilliant military strategist, Cyrus vanquished the king of the Medes, then integrated all the Iranian tribes, whose skill at fighting on horseback gave his army great mobility. His triumph over Lydia, in Asia Minor near the Aegean Sea, filled his treasury with that country’s tremendous wealth.