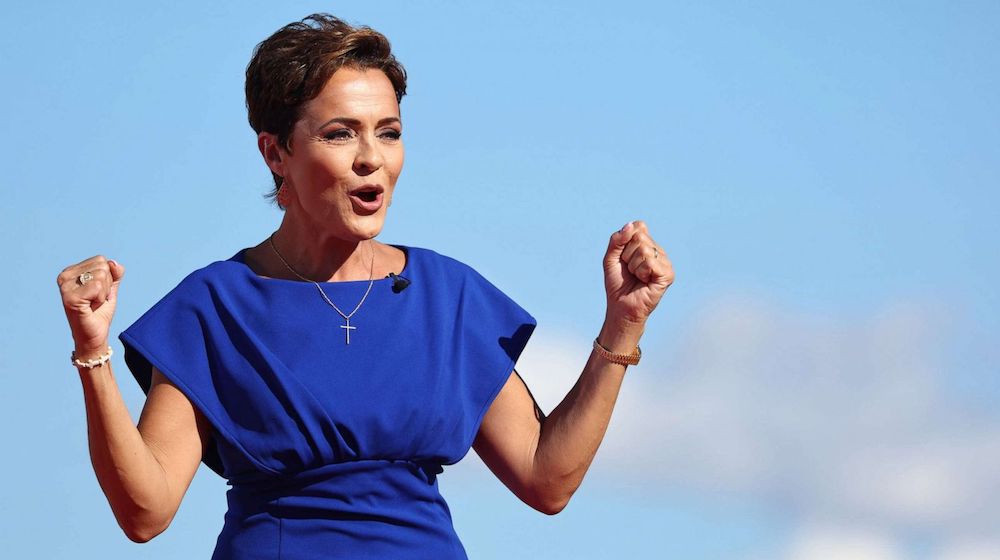 It could be a twist of fate that the Republican candidate for AZ Governor, Kari Lake, decided to run for State office after struggling to understand the voting irregularities in 2020. Lake, a trained professional investigative journalist, and reporter jumped into politics over her concerns for election integrity and now stands as the central figure in the most insane, brazen, and obvious election fraud we have yet to see.

As of Friday morning, there has been no winner announced in the aggressively fought battle for top leadership for the Southern state.

It could take some time to make sense of the 2022 midterm election in Arizona, according to local news, AZ Central, in their report on Lake

“We don’t even have full results yet, with several races shaping up to be nail-biters. But voters clearly had some messages to send amid the chaos,” the outlet reported, adding more details of how the republicans were responsible:

We’ve got a problem if Lake loses

“There was no conspiracy to rig the printers or count votes at a snail’s pace in Arizona, but when this is over, we do need to overhaul our election system,” one left-leaning reporter wrote.

“The malfunction with printers that dragged on for some 7-8 hours during the important first waves of voting was a big deal, affecting 30% of Maricopa County voting centers.

Even if that has no impact on outcomes, Republican voters are furious. Nerves were already on edge as they always are Election Day, and the breakdown put a torch on them. If she loses, her voters will be incandescent.”

Look who the outlet blames, see if this makes sense:

“The Republicans who run elections in Maricopa County would not purposefully undermine their own voters and candidates. But MAGA voters who don’t trust the election system and carried themselves to the polls on Election Day were inordinately affected.

When this election is over and its managers do the post-mortem, we’re likely to find that Republican lawmakers over years of reforming elections created the log jam.

But that hardly matters.

The system is so slow it increases distrust in it. Across Arizona and the nation and even in Europe, people are asking what is wrong with Maricopa County?

Other states have built election systems that are fast and efficient. We can too. “

What?  How does that make sense? There were too many clownish things happening in AZ.

“The games have begun in Arizona…,” Noah at We Love Trump reported, adding the following details:

We have been bringing you reports on the ‘printing error‘ in Maricopa County—a place that seems to be plagued by election ‘irregularities’ every time they hold an election.

To add to the growing circus, the Arizona Governor’s race is now “too close to call”, according to leading media outlets.

Maricopa County now says 70 of 223 voting locations were affected by printer problems on Tuesday, up from initial estimate of about 60. All ballots will be accurately counted, officials say. https://t.co/P6Y7xcYn8K

In other words, we still have no idea if Kari Lake, a leading anti-establishment figure, and one of the most closely watched political contenders in the country, has won her race and this is such a huge disappointment for all of us here.

Something tells me we are going to see massive issues with this—welcome to midterm week, perhaps a midterm month.

Here are the latest developments in this nail-biting contest:

This is what we were saying from the @GOP war room Tuesday and I announced with @KariLake at her presser after voting 11/8. At noon on Election Day, at least 27% of the voting centers had one or both tabulators not functioning, some also had printer malfunctions. Terrible fail!” Harmeet K. Dhillon (@pnjaban) posted November 10, 2022.

With over 77 percent of the votes counted as of 10:10 p.m. ET on Wednesday, Hobbs led Republican gubernatorial candidate Kari Lake by two-thirds of a percentage point, according to Decision Desk HQ.

Lake appeared in interviews and said: “I feel 100% certain I’m going to win…We’re only down by a few thousand votes right now, when those votes come in we’re gonna see a lot of liberal minds blowing up,” Kari Lake (@KariLake) posted on November 10, 2022.

.@KariLake: “I feel 100% certain I’m going to win…We’re only down by a few thousand votes right now, when those votes come in we’re gonna see a lot of liberal minds blowing up.” pic.twitter.com/QX5EGcnSXw

Hobbs and other Democrats told supporters they were encouraged by the early returns but warned a long slog of counting was ahead.

“I have every confidence that the counties administering this election conducted a free and fair election, and their results will be accurate,” Hobbs told supporters gathered in Phoenix. “But they will take time, so prepare for a long evening and a few more days of counting.”

Mail ballots returned Tuesday or shortly before were not yet reported and will be counted in the coming days.