In a statement issued on Monday, Trump celebrated the news and said that “all I have to do is wait for all of the money she owes me”.

The complete statement was posted on Twitter by Trump’s spokeswoman, Liz Harrington:

“The 9th Circuit just issued a final ruling in the Stephanie Clifford (aka Stormy Daniels) frivolous lawsuit case against me brought by her disgraced lawyer, Michael Avenatti, upholding the lower court ruling that she owes me nearly $300,000 in attorney fees, costs, and sanctions (not including appeal costs).

As I have stated many times throughout the years, I never had an affair with Stormy Daniels, nor would I ever have wanted to. The ruling was a total and complete victory and vindication for, and of me. The awsuit was a purely political stunt that never should have been started, or allowed to happen, &I am pleased that my lawyers were able to bring it to a successful conclusion after the court fully rejected her appeal.

Now all I have to do is wait for allof the money she owes me.

Daniels made a defiant stand on Twitter, saying that she has no plans of paying Trump what she now owes him.

Daniels reported that she “will go to jail before I pay a penny” in a post, in response to the ruling.

I will go to jail before I pay a penny

At the same time, opponents of Trump’s, like disgraced former attorney Michael Cohen were pouting about the ruling- and were busy screwing up more information about Trump, lying about his actions- as Daniels quickly rushed in to set the record straight- lest she is accused of defamation or something.

Woah! I never said it was an affair. I have said over and over that he CORNERED ME coming out of a bathroom. Well…I guess to him, that IS an affair. Seems to be his pattern.

Daniels, who claimed that Trump ‘cheated on Melania’ with her, appeared to be walking back her claims.

Flashback to how NPR reported on Daniels claims:

Her alleged affair with President Trump began dominating news cycles, the adult film actress also known as Stormy Daniels shared graphic details and said she signed a nondisclosure agreement to keep quiet about the encounter because she felt threatened.

Daniels appeared on CBS’ 60 Minutes, and walked Anderson Cooper through her side of her experience with Trump, beginning with an encounter at a golf tournament in 2006 in which Daniels playfully swatted Trump on the behind with a magazine he had been holding that had his face on the cover. 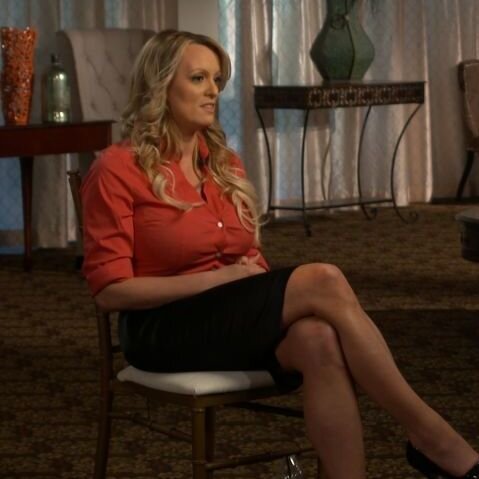 “From that moment on, he was a completely different person,” Daniels said. “He was like, ‘Wow, you — you are special. You remind me of my daughter.’ You know — he was like, ‘You’re smart and beautiful, and a woman to be reckoned with, and I like you. I like you.’ ”

Daniels said she had sex with Trump, despite not wanting to or being physically attracted to him because she felt trapped once she went back to his hotel room alone. Daniels was 27 years old at the time, and Trump was 60.

Still, Daniels made it clear she didn’t consider herself “a victim” and that the sex was “consensual.” Trump did not wear a condom, she said.

Trump, denied having sex with Daniels.

The Friday ruling by the US Circuit Court of Appeals for the Ninth Circuit followed an earlier ruling by a lower court that rejected Daniels’ defamation suit, so there is a pattern now that establishes that Daniels, who sells videos to her ‘onlyfans’ of herself in bed, says things – for money- that is just not reliable.

The legal battle has set a chain reaction of appeals, with attorneys for both parties being convicted of felonies, in a bizarre twist.

Yahoo reported on the ruling:

Friday’s ruling capped a prolonged legal battle between Daniels, whose birth name is Stephanie Clifford, and Trump over her allegation that she had sex with him in 2006 and was bribed to stay quiet about it. Daniels sued for defamation after Trump called her claim that a man threatened her about the Trump tryst story a “con job.” A judge dismissed the defamation suit in 2018, saying Trump’s statements were protected by the First Amendment.

Trump’s then-fixer, attorney Michael Cohen, admitted making hush-money payments of $130,000 to Daniels and another woman on Trump’s behalf before the 2016 election to keep them from telling their stories. Cohen served prison time on charges that include campaign finance violations involving the payments.

Cohen misrepresented Trump, his client, and continues to spread lies about him.

Meanwhile, Daniels’ attorney Michael Avenatti was convicted last month of cheating Daniels out of hundreds of thousands of dollars in a deal for a book detailing her alleged tryst with Trump and was found guilty of stealing $300,000 from Daniels.

Avenatti shot to fame by advising Daniels in 2018 after she claimed then-President Trump had cheated on Melania with Daniels and then paid her off to try and secure his 2016 election victory.