According to reports today, a British Muslim who took a rabbi and three members of his congregation hostage in a Texas synagogue was once banned from courthouses after ranting about 9/11, according to reports.

It was revealed that Malik Faisal Akram, 44, from Blackburn, Lancashire, had been branded a ‘menace’ for raving about the World Trade Center attack in 2001 as US and UK authorities today tried to discover whether he was part of a wider terror cell.

On the day following the attack that killed more than 2,750 people, the terror suspect was given an exclusion order by Blackburn’s magistrates’ court, the first one of its kind for 25 years. 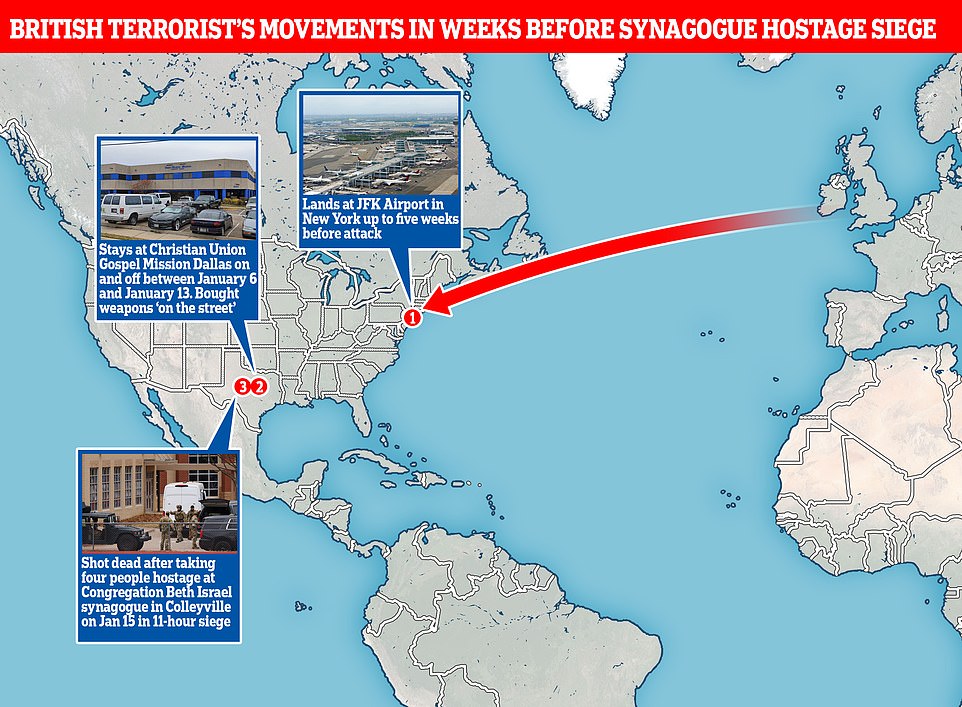 It is unclear if he was known to security services on either side of the Atlantic after that incident 20 years ago, and how he managed to enter the United States two weeks ago with such a significant criminal record.

His first stop in the United States was at New York’s JFK Airport on January 2 before he spent between January 6 and January 13 in a Christian charity’s homeless shelter in Dallas, where he bought a gun ‘on the street.’

His hostage-taking occurred two days later in Colleyville, where he was shot and killed after the SWAT team surrounded the synagogue. No one else was killed.

British counter-terrorism officers arrested two teenagers in south Manchester last night; they have not yet been identified.

The family of Akram was working with Texas police to get Akram to turn himself in. According to his younger brother, Gulbar, they were called by the police to the Greenbank police station in Blackburn to speak with his older brother, who was armed and allegedly had a bomb.

During the live feed of the service he raided, he shouted at the congregation in a British accent: ‘If anyone tries to enter this building – everyone will die.’ He continued: ‘I’m gunned up. I’m ammo-ed up. Guess what, I will die. I am going to die, so don’t cry for me’ he shouted, adding anti-Semitic insults.

After releasing one of his hostages, Akram was chasing two more hostages with a handgun after they ran out of a side door. Akram died as a result of a hail of bullets when an FBI rescue team stormed the building at around 10 pm on Saturday.

It is not yet clear how extensive his criminal record is, but some of his offenses may have been too minor or too old to prevent him from getting into the United States.

If he lied about not being a criminal, his 9/11 rants and other crimes may not have been discovered because the US authorities do not normally have access to the British criminal records database.

According to Biden, Akram had just flown to America two weeks ago, lived in a homeless shelter and bought a gun ‘on the street.’

Despite his family describing him as having mental health issues, concerns over a wider plot grew last night after two teenagers were arrested over the incident by counterterrorism officers in south Manchester.

Legal restrictions make it impossible to identify the pair. Both are believed to be under 18 years old. The pair is still being held, according to Greater Manchester Police.

According to the FBI field office in Dallas, ‘no indication’ was found that anyone else was involved in the ‘act of terror,’ as President Biden characterized it.

When the FBI entered the building in Texas on Saturday night, they shot dead Malik Faisal Akram, who was from Lancashire.

In September 2001, after officials complained that the terrorist was persistently causing trouble inside the court even when not before the bench, he was banned from Blackburn Magistrates’ Court and described as a ‘menace.’

The ban came after a string of incidents that culminated with Akram abusing ushers in the wake of the New York attacks.

Akram was warned that, under the Contempt of Court Act, he would be detained and could be sentenced to prison or fined £2,500 if he entered the court complex.

Exclusion Orders are imposed under Section 12 of the Contempt of Court Act and have only ever been used once, at Blackburn Magistrates’ Court.

An official letter sent to Akram, known by his middle name Faisal, confirmed the suspension stated: ‘Once again you were threatening and abusive towards court staff. In a clear reference to the terrorist attack on New York the previous day you said on more than one occasion to one of my court ushers ‘you should have been on the f***ing plane.’

A local newspaper reported that Akram said at the time: ‘I’m innocent. This is nothing to do with me because I didn’t say that. People at the court have just got it in for me because they don’t like me.’ According to Mr. Wells, Akram was a ‘menace’ who had a history of abusing staff members.

In a statement last night, Gulbar Malik, the brother of Malik, described their ‘devastation’ and how their relatives had been in contact with Malik although the police had requested he surrender.

Nevertheless, he spoke to Sky News and demanded to know how the incident came to pass. ‘He’s known to police. Got a criminal record. How was he allowed to get a visa and acquire a gun?’, he said.

This morning, the reason why Akram flew to Texas, 4,700 miles from his home in Lancashire, was still unknown.

The FBI’s elite Hostage Rescue Team shot him dead around 9 pm local time after he had held four hostages, including the rabbi Charlie Cytron-Walker, for ten hours.